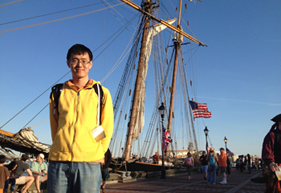 This month, I want to introduce you to someone.

His name is Chenqi Huang, but he goes by the nickname, Bill.

Bill first came on board Pride of Baltimore II back in 1998, during our Asia tour, in Xiamen, China.

At the time he was just 12 years old.

“I was always interested in sailing,” Bill says, “A Tall Ship was not a common sight in China at the time – I just had to go on board.”

Bill took a deck tour of Pride as part of a program organized by his elementary school.

“Xiamen is a coastal city, and not many Americans visited that part of the country. The crew of Pride of Baltimore, including Captain Miles, were my first encounter with Americans,” he says.

In 2011, Bill moved to the United States in order to study at the University of Maryland. He is currently obtaining his master’s degree in business strategy.

“I visited a friend in Baltimore not too long ago and saw Pride docked in Fells Point. I had to do a double take. ‘Hey!’ I thought, ‘This looks familiar. And sure enough, it was the same beautiful ship I had remembered from those many years ago!”

Beginning in November 1997, Pride sailed nearly 8,000 miles through the Caribbean, across the Panama Canal, to Hawaii, Japan and then China. It was a yearlong voyage and, as the Baltimore Sun reported, it was made to promote trade and business between Maryland and Asia, and solidify relations with key shipping companies that worked with the Port of Baltimore.

Seventeen years later, people still remember the voyage, and the beautiful vessel that is Pride of Baltimore II.

Bill is a great example of the goodwill that Pride has generated around the globe. Since her commissioning in 1988, Pride II has sailed 250,000 nautical miles and visited more than 200 ports in 40 countries, capturing the imagination of millions worldwide.

“I wish more people would have the experience of sailing on Pride for themselves,” Bill continues, “It is a very unique and relaxing experience. I wish you more opportunities to sail around the world and meet more people – you never know, maybe one will come back to Baltimore many years later, just like I did!”

Schooner racing on the Chesapeake Bay is rooted in the trade rivalry between Baltimore, Maryland, at the northern end of the bay, and Portsmouth/Norfolk, Virginia, at the southern end. From the 18th century through the early 20th century, sailing vessels delivered goods and people to their destinations and the fastest often garnered the best price for their cargo by beating the slower vessels into port. Over the years, commercial schooner designs evolved for the bay’s routes, taking into consideration shallow waters, local crops and regional needs, with speed being a primary focus in order to provide a competitive edge. Fast, maneuverable schooners also played a critical role in our nation’s early wars.

In 1988, when the City of Baltimore launched her flagship modeled on those earlier vessels, Pride of Baltimore II, Captain Lane Briggs of the tugantine Norfolk Rebel – the world’s only sail-powered schooner-rigged tugboat – challenged Pride II to a race from Baltimore to Norfolk, reviving an historic rivalry between schooners, captains and cities on the bay. With the challenge accepted, the GCBSR was born and it has endured to this day.

Pride of Baltimore II will be proudly racing in the 26th annual Great Chesapeake Bay Schooner Race (GCBSR). There are still some guest crew spaces left if you are up for an exhilarating experience. Guest crew applications must be reviewed and approved, so apply today. The cost for this GCBSR adventure is $1,000 and you can apply from our Guest Crew Opportunities page.

If you prefer a more relaxing sail, there are also guest crew spaces available for the voyage home from Portsmouth, as well as on two other guest crew trips at the end of the month. Visit our website for more information on guest crew opportunities.

Pride will offer free deck tours and a Day Sail from 10 am-12 pm. Register here.

I hope you’re enjoying our monthly Sail Mail newsletter. If you have a friend or family member who might enjoy receiving up-to-the-minute news and information about our news, events, and updates (and, of course, our trivia questions), simply send them this link: http://www.pride2.org/e-newsletter-registration/

Congratulations to everyone who correctly answered last month’s question!

The original Pride of Baltimore was flying a fisherman sail in the photo and was steered with a tiller. Pride II is not rigged for a fisherman because it was only useful in a very limited set of conditions and would compromise the square topsail braces. The fisherman is the fore-and-aft rigged sail above the foresail between the two masts. Pride II is steered with a wheel which can be manned by one sailor even in tough conditions.

Ready for this month’s question?

Question: On the Pride of Baltimore II, one of the most frequent questions we get from visitors, as they look up at our rig, is “What’s with all that fuzzy stuff up there? Tell us what it is, and what we use it for.

Email us the correct answer, and you could win a prize!