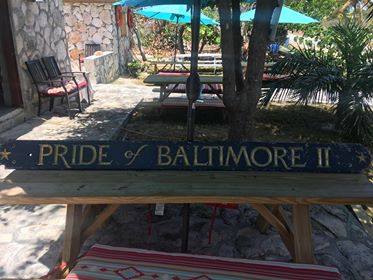 Pride of Baltimore II’s starboard name board washed off the ship last summer during a robust sail between Charleston and Bermuda. We received a Facebook message earlier this month that the name board had turned up in the Bahamas on Cat Island, an island that runs along the Atlantic side of the Bahamas, not far west of San Salvador Island.

The photo of it shows that the board is in pretty good condition. There have been some Facebook comments wondering about the path that the name board took. The sailing route from Charleston to Bermuda crosses the northerly bound Gulf Stream. And the North Atlantic gyre is a clockwise rotation. Hence the western North Atlantic presents a constant current drift northward. The Bahamas are well south of the sailing passage that Pride took. So, how did the name board end up in the Bahamas?

At a glance, it follows that anything in the water that has little structure up in the air above the surface is more likely to follow current direction than wind direction. Thus, under the influence of the Gulf Stream and a clockwise ocean gyre, the name board would seem likely to start to follow the western North Atlantic’s northward flow at first, then northeast, then eventually eastward, and on southward, then back westward in a large arc from the point where it was washed off of Pride as she sailed between Charleston and Bermuda. If the name board followed that route and went all the way around the gyre to end up in the Bahamas, a rough distance calculation suggests a “voyage” of at least 3,000 nautical miles, likely even more distance. The board washed off the ship mid-May last year; being it was mid-April 2018 when we got word of the beached board; that means a voyage of 11 months. An average speed of just less than half a knot (half a nautical mile: nautical mile = 6,076 feet versus a statute mile = 5280 feet). Without more details, this drifting “voyage” seems somewhat plausible. Except for the vagaries of ocean surface behavior as a result of wind. And the board is in such good shape despite 11 months in the water. Such good shape seems unlikely to me from my experience trying to keep Pride’s waterline clean from moss and barnacles, even with annual applications of specially created anti-fouling bottom paint. Unless the beach combing name board finder did a lot of cleaning before photographing the board.

Meanwhile, the name board can be likened to a surf board. It floats flat right at the surface of the ocean. It is about one inch thick by around 5 feet long and 8 inches wide. Being a pretty dense wood, it floats with not much above the water, but not very deep in the water either. What would this “shallow draft” board do left to its own devices in surface ocean water roughed up by the wind? Except in quite strong currents, it seems to me the board likely could spend more time drifting/surfing with the waves and local surface currents made by wind.

In the past 11 months, the western North Atlantic has been experiencing typically various wind directions that have dominating average directions as the seasons go by. Average wind direction shifts from summertime southeast, south, and southwest to northwest, north, and northeast during fall, winter, and spring months.

I think it is quite plausible that Pride’s missing name board drifted somewhat more directly to her landfall in the Bahamas from the point of being washed off the ship while voyaging toward Bermuda. And being more a surf board going with surface waves and surface current over the top of any currents deeper than surface water, plus the good chance of actually being in the counter currents of the Gulf Stream, it looks to me like the name board could have gone pretty directly to the Cat Island landfall. And being in such good condition, maybe achieved landfall in quite a bit less time than these past 11 months, possibly spending a lot of time resting above the high-water line on a Bahamian beach as if it had taken a warm winter holiday from the cold and maddening crowd of modern northern civilization.