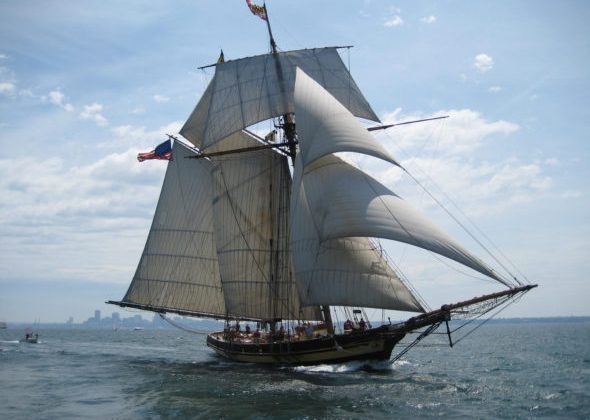 Pride of Baltimore II, America’s Star-Spangled Ambassador, proudly announces its departure from Baltimore’s Inner Harbor in the morning of Tuesday, June 7, 2016, for a four-month voyage along the East Coast to the Great Lakes. The tall ship’s mission is to promote Maryland’s economic interests to ports around the U.S. and Canada, as well as participate in the Tall Ships Challenge® Great Lakes 2016, which involves several sailing races throughout the summer. This marks the first time Pride II has left the Chesapeake Bay since 2013.

“In addition to participation in tall ship festivals throughout the Great Lakes, Pride IIwill also play an economic development role, ” says Rick Scott, Executive Director. “Through a recent partnership with the state of Maryland, Pride II will promote economic development and tourism for the state during her voyage to the Great Lakes this summer.”

Around 9 am, with her beautiful sails unfurled, Pride II will make a farewell voyage around the Inner Harbor and fire her cannons. The ship will travel past Fort McHenry National Monument and Historic Shrine, one of several vantage points for both photographers and the general public to bid farewell before Pride II‘s return in early October. Pride II‘s exact departure time will be determined according to the weatheron Tuesday; please call Laura Rodini at 202-669-3065 or email laura@pride2.org for up-to-the minute information.

Fort McHenry: View of Pride II approaching/passing by with Key Bridge in background.

Pride II will voyage north along the east coast, and then enter the St. Lawrence Seaway through a series of locks on her way to the Great Lakes in order to participate in the Tall Ships Challenge® Great Lakes 2016. “We are excited to take Pride II out of her home waters for the first time in several years,” says Captain Jan Miles. “Pride of Baltimore II is Maryland’s working symbol of the great natural resources and spectacular beauty of the Chesapeake Bay region, and a reminder of America’s rich maritime heritage. Pride II has a huge national and international following for her beauty, prowess and marketing ability, and we look forward to showcasing that.”

Pride II will race against other tall ships in each of the five freshwater lakes, making for heart-stopping events that tens of thousands of visitors will witness. Her unique design makes Pride II one of the most beloved and recognizable U.S. sailing vessels in the entire world.

On board Pride II, there will be professional photographers and videographers to capture the spirit of the moments and transmit images back to Pride II’s Baltimore headquarters.

At each port, Pride II will offer free deck tours and, in some ports, offer day sails for the general public. She will also host business receptions, as Pride II represents Maryland’s economic development interests throughout North America. Tens of thousands of visitors are expected to cross her decks this summer.

In January 2016, Pride II announced a public-private partnership with the state of Maryland to promote economic development for the state and the city of Baltimore. Announcing the new partnership, Governor Larry Hogan said, “Pride of Baltimore II is a wonderful symbol of the rich maritime heritage of both our state and Baltimore, and the ship generates extremely valuable exposure and goodwill wherever she goes. We are pleased to have a new partnership with the Pride to have her help carry our message across the state, nation and globe—that Maryland is great place to do business.”

Pride II will be reporting back on its progress.