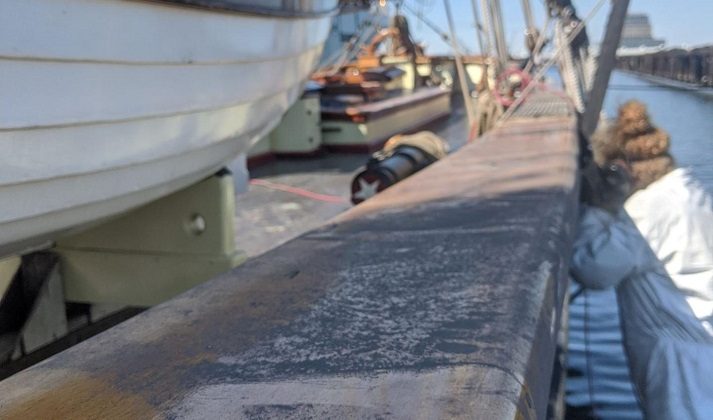 Pride of Baltimore II remains moored at her fenced secure marine facility in an industrial area of Baltimore named Canton. A compound located some several blocks away from any residential area, so there is no pedestrian traffic passing by.

The live-aboard crew have long been emulating “stay in place” during up-rig that started back in mid-February. Sure, occasionally they ventured out in the evening. However, with full days of work, good meals provided three times each day, and a commute to work that can be counted in mere feet, going the distance to a nightlife place, walking nearly a mile after a full day of vessel preparation was almost more effort than it was worth. So, when the stay-at-home order was issued, life for Pride’s crew did not change much.

Two weeks ago, there were two crew shakedown sails. Just the crew. Last week, Marylanders were ordered to stay at home. During this very important strategy for restricting spread of this new virus, Pride’s crew is getting into maintenance as well as finishing the up-rig. Like all of you, we are awaiting the time that Pride is able to again do what she is worldwide renowned for.

The first week of stay-in-place (last week), the crew got into varnishing. One of the most outstanding views of Pride for those that walk by or aboard is seeing her varnished rail-cap atop her bulwark — 3.5-inch-thick Central American Mahogany some 14 inches wide and more than 200 feet long as it rings the deck.

The preparation for the first full coat of varnish took six crew two days of sanding and cleaning up. Applying one coat of varnish took four crew most of one day. Properly speaking, there ought to be another three to five coats of varnish applied each year. Over the span of a normal operating season, those three to five coats eventually get applied between public events and voyaging. It looks like this spring those coats might all get applied before the next sail.

I and the crew sincerely hope all of you are being very diligent of your personal safety as well all those around you as we all work to halt the spread of infection.