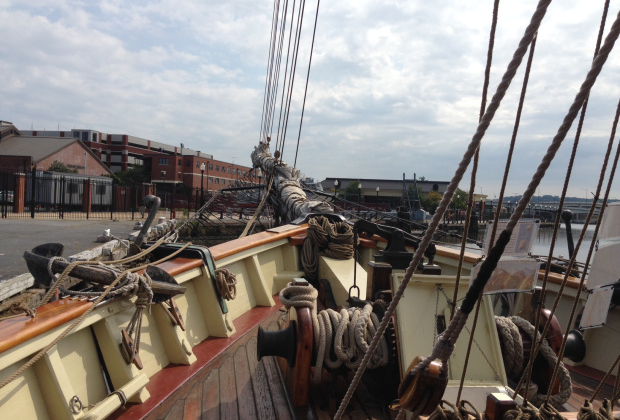 Pride of Baltimore II is moored at the Navy Yard in Washington DC. A 100 nautical mile trek up the Potomac River. A river that winds serpentine like as it narrows to a navigable channel only a couple of hundred feet wide. Today there are two low level bridges to pass through requiring opening and there is also a shallow water patch that cannot be passed over unless the water level is higher than 2 feet above low water. Fortunately the range of tidal water levels in the DC area is 3 or more feet. And Pride has engines to handle the tight waters, the specific times of bridge openings that must be booked in advance by not less than 24 hours as well docking on schedules set long in advance.

Even with such modern capability, the actual act of sailing 1812 War period Baltimore Schooner Privateer Pride in any of the waters and rivers of the Chesapeake Bay is a nearly constant level of physical and mental demand on her officers and crew; they’re responding to a nearly continuous sail evolution, when one includes setting or striking and adjusting sail as the ship is sailed and cannot avoid approaching shallow water on any course she is directed toward. So, for the most part, sailing Pride in the waters of the Chesapeake Bay is more continually mentally and physically demanding for all aboard than when Pride voyages longer voyages and more open waters.

There are times when a long slant of uninterrupted sailing by any sail evolution occurs in our lovely Chesapeake Bay. That is when the crew have a chance to breath and maybe do some shipboard maintenance. But Pride‘s officers are still constantly involved with monitoring the direction of sailing for approaching shallow water and any changes of wind pattern due to cloud/rain activity (of course an approaching weather front) that may have a beneficial or negative affect on the current situation. All this reality ignores for the moment other vessel traffic (recreational and commercial) also plying the Bay.

So, Chesapeake Bay sailing is not generally a sublime experience aboard Pride considering her size and her complexity and her speed, that can take you to a decision point very suddenly. All who ever sail her look forward to the open waters and the longer voyages. That is where the romance we all read about and is expressed so clearly in John Masefield’s poem Sea Fever with the a most well known line “…and all I want is a tall ship and a star to steer her by…”

But Being in home waters for the Bicentennial of the Maryland portion of the 1812 War is a very special occasion. Especially as it was vessels like Pride that gave as much reason for the British Navy and Marines to make the effort to invade Baltimore to destroy the shipyards making such schooner privateers; only to fail and leave Americans with our county’s National Anthem, the Star-Spangled Banner, written in September of 1814, almost 200 years ago. Just after the burning of Washington DC government buildings as well the Navy Yard Pride is currently moored at. There is a lot of reflecting here in Maryland and Washington DC going on about what happened and why nearly two centuries ago. Lots of interesting details of that period are being re-understood and many new ways of depicting what happened and why is on display here at the Navy Yard Museum as well scattered around Maryland and for sure in Baltimore.

I hope all of you readers are taking a chance to visit such sites of history and attend events commemorating the actual anniversaries. The crescendo events scheduled to occur in Baltimore in September will be SPECTACULAR!!! Please come and help with the commemorations!!

Signed; the hard sailing Crew and Officers of Pride of Baltimore II