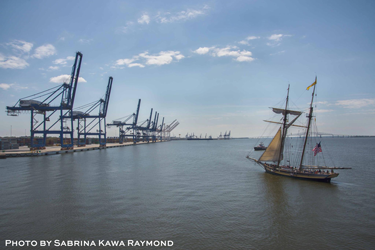 After an 8,000-Nautical-Mile Voyage, Pride of Baltimore II Returns Home

Pride II will be escorted into Baltimore Harbor by the Baltimore City Fire Department’s fire boat and a Moran tug. Pride II will sail past Fort McHenry at approximately 12:30 p.m., through the Baltimore Inner Harbor around 1:20 p.m., and, with cannons blazing, dock at Broadway Pier in Fells Point close to 2 p.m. Pride II will be open for FREE deck tours at Broadway Pier in Fells Point from 3 to 6:30 p.m. At 6 p.m., Baltimore Rock Opera Society (BROS) will commandeer the ship with epic rock and roll from their world-premiere rock opera BRIDES OF TORTUGA**. BROS is excited to partner with the legendary replica privateer vessel to stage a preview of Baltimore’s newest original rock musical, opening October 28th. Come see Broadway Pier ablaze with the powerful voices of our all-female seafaring crew. Get ready to bang your head alongside the crew of the ship and the most energetic rock n roll community experience in Baltimore.

The timeline is approximate, and as follows:

Under Armour: View of Pride II approaching/passing by with Fells Point in the background. 12:55 p.m.

Fells Point/Broadway Pier: View of Pride II approaching/passing by with Under Armour in the background. 12:55 p.m.

Federal Hill (on actual hill): Full view of Pride II arriving and turning around in the Inner Harbor. 1:10 p.m.

Rusty Skupper: Full view of Pride II arriving and turning around in the Inner Harbor. 1:10 p.m.

In June 2016, Pride II departed Baltimore for Toronto, Ontario, to participate in the TALL SHIPS CHALLENGE® Great Lakes 2016, traveling more than 8,000 nautical miles, participating in eight large tall ship festivals, and stopping in another nine Great Lakes ports. All told, Pride II has welcomed over 64,000 fans of the ship and visitors across her deck in twenty-one ports so far this year.

At the tall ship festivals, Pride’s presence in itself promoted Baltimore and Maryland in a positive light, but her crew also highlighted tourism and economic development opportunities in Maryland. Several businesses also used Pride to entertain staff and clients in various ports. Port organizers treated sponsors – such as Dow Corning in Bay City and Shell Canada in Brockville – and VIPs to dockside receptions on board Pride.  The Maryland Port Administration hosted a sailing charter in Erie, Pennsylvania.

Pride participated in five TALL SHIPS CHALLENGE® races this summer, one in each of the Great Lakes, racing against other traditional sailing vessels and sail training ships, including the Viking longship Draken Harald Hårfagre and the War of 1812 US Brig Niagara. Pride II did exceptionally well in the races with a record of three first places, one second, and one third. Each of the races had its own unique challenges and conditions and Pride of Baltimore II and her crew performed well.

During her Great Lakes voyage, the support for Pride of Baltimore II was overwhelming. From Cape Vincent, New York, to the banks of the Welland Canal; from Sturgeon Bay to the shores of Superior; thousands of people lined the waterways to welcome her with warm smiles and cameras in hand. Many people tracked the ship online and woke up in the twilight hours hoping to catch a glimpse of the iconic Pride of Baltimore II sailing by. Visitors of all ages in the Great Lakes were appreciative that Pride sailed thousands of miles to visit their small towns and cities.

Pride of Baltimore II promotes tourism and represents the economic interests of Baltimore and Maryland wherever she travels.  Maryland is ranked #1 in the region for job growth, and the U.S. Department of Commerce ranked the greater Baltimore region as #3 for innovation and entrepreneurship. Rick Scott, executive director for Pride of Baltimore, Inc., remarked, “Whenever Pride II voyages to distant ports, it’s a wonderful opportunity to shine a positive light on our home city of Baltimore, birthplace of our national anthem. In addition to promoting tourism for our region, we hope to highlight the natural beauty of the Chesapeake Bay, the vibrancy of the Port of Baltimore, and that Maryland is a great place to do business.”

**About Brides of Tortuga

When your life is burned to the ground and you are handed a sword, do you take it? Would you sail towards certain death to pursue what is right?

The Baltimore Rock Opera Society is proud to present our final show of 2016: Brides of Tortuga! This raucous, rebellious rock and roll musical begins in 1661 in Calais, France, and crosses the wild & dangerous open Atlantic Ocean and comes to a bloody close in the Caribbean Sea. The show follows Charlotte, a French freedom fighter who must figure out how to captain an unblooded crew and escape the French Navy who are hot on their tails, and Mary, a humble barmaid who gets swept up in the adventure.

Brides of Tortuga features a large cast, epic sets, intensive fight choreography, a stirring vocal ensemble, and live rock band buttressed by strings, horns and a strong percussion section. The show is a powerful statement about rage, self-determination and kicking ass on a boat.

Brides of Tortuga is the 8th original production written and produced by the Baltimore Rock Opera Society. BROS is excited to premier this show at the insanely tricked out Chesapeake Arts Center in Brooklyn Park, MD. All shows are General Admission seating with the exception of BROS Supporter Seats as described below. Doors for all shows will open approximately 30 minutes prior to showtimes.