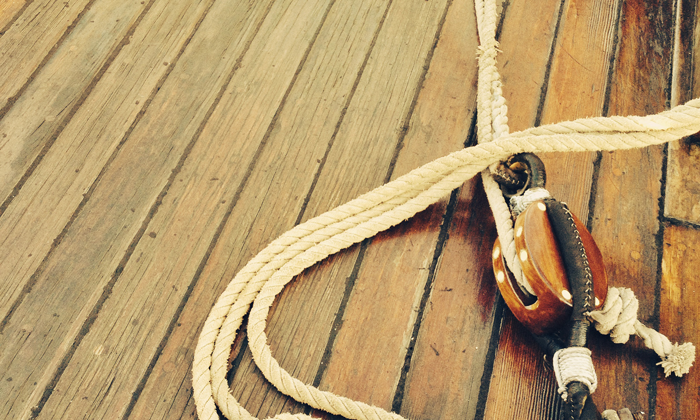 Since her return from the Battle of Caulks Field Re-enactment events last weekend in Chestertown, Pride II and her crew have been chock-a-block in readying ship and crew for the coming week. As Baltimore’s only War of 1812 ship, Pride II will find herself central in the commemorations of the Battle of Baltimore and the birth of our National Anthem. Though alliterative marketers have dubbed this week’s event Star-Spangled “Spectacular,” two hundred years ago a city hunkering down for invasion and siege would more likely have featured anxiety, stress, and fatigue.

In the few ship movements of our busy week, we found ourselves at Fort McHenry Wednesday afternoon. Our visit was largely logistic – Ranger Vince Vaise and I were trying to finalize some details for our collaborative “Dawn’s Early Light/Star-Spangled Sail” programming on Sunday the 14th. But Ranger Vaise took the time give me a sneak preview of the new Exhibit featuring Major George Armistead. Set up within the Major’s Headquarters in the Fort, it features a bronze statue of Armistead himself, shoulders anxiously locked and channeling weighty concerns to hands planted firmly next to a screen set into the table he leans on. The screen activates to show frantic hands of the officers of the Fort pouring over charts, tables, muster lists, and ammunition stores while speculating over the movements of the advancing British.

As his likeness simultaneously stares downward at the table and outward to you, the visitor, Armistead’s concerns are expressed though an inner monologue – there wasn’t enough ammunition, twenty percent of the men had malaria, the Fort’s magazine was a vulnerable target, food was scarce and no one knew how long it might have to last. Like anyone thick in preparations, he wanted more time, wanted the certainty of readiness.

The urgency of the Fort was not different. The enormous VIP tent was already being set up, ceremonial flags (presumably gifts for the slew of dignitaries) were being run up and down quickly to be certified as flown over the Fort’s storied flag pole, at 4:30 in the afternoon, a hoarse but energetic Ranger Vaise was just being handed a bagged lunch from a fellow Ranger who was concerned he’d forget to eat at all. Not wanting to distract, or neglect our own busy schedule, we left the Fort staff to their own preparations and took Pride II back to wrap up some of our own.

None of us are hunkering down for a live firefight, but that doesn’t mean those of us in Baltimore’s 1812 Historical community aren’t serious about maximizing this once in a life time anniversary. Pride II’s crew has been attending to prepping the ship – provisioning the galley in advance of the traffic hassles the crowds are likely to bring, suiting everyone up with clean laundry for all of the public interactions, and maintaining the Pride Memorial in Rash Field (this week should honor and remember all those who served, and died, in the name of Baltimore). The crew are malaria free, the powder we are loading aboard is all for salutes, not earnest shots, and we’ll keep feeding the crew with no worries of shortage. But I think our industry this week and next will connect us with Armistead and his men in an eternal network of efforts for our Star-Spangled City.

Come test us, and join in this historic event.