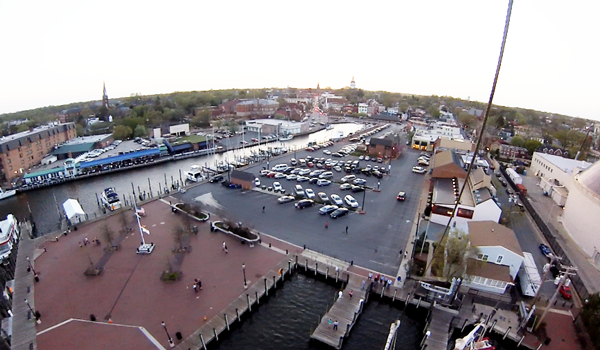 Pride of Baltimore II alongside at the National Sailing Hall of Fame Dock, Annapolis, MD

It’s been windy this week. Not so newsworthy overall, given all the political turmoil at home and aboard. But to say such a thing with straight face in the Chesapeake during the last week of July is kind of a big damn deal. On a typical week, most of us who make way using the wind would be psyched if we had ten knots. Even five is sometimes enough to soothe the frustrations of being becalmed. Anything to keep the crew and guest crew from dropping sinking M&M’s for amusement, trying to see which is the last color visible as the ship bobs along at less than swimming speed.

But lately we’ve had wind to reform callouses and stretch out aching arms. A few solid daysails from Fort McHenry and the Inner Harbor, then we boarded guest crew Sunday an early week cruise of the Bay. Originally, we were to have boarded these guest crew in Ocean City, but incomplete dredging made it impossible for Pride II to get into Maryland’s only ocean port, so instead we had two days and 25 knots of wind for covering the 28 nautical miles to Annapolis.

Spending a morning on logistics and fuel, we sailed from the Inner Harbor at noon, and were past Annapolis on a beam reach in three hours. But to stretch our legs and show our guest crew what Pride II is all about, we kept on sailing. Straight past the Severn and the South Rivers, on past the Patuxent, where we entertained the idea of anchoring – but who’d spend a windy July night at anchor if they could sail!

Not us. We cruised right on to the Potomac River mouth, tacked and sailed over to Tangier Sound, using as much of the Bay as we could without going too far south. The breeze was already clocking toward Northwest, and we didn’t want to get too far down wind. Expecting the wind to fade Tuesday, we sailed straight through Monday night, but by mid morning we were still going strong. It wasn’t until evening time that we finally saw less than 10 knots. For a peaceful night, we sailed onto the hook near Dares Beach.

At dawn, a last gasp of Northwesterly ushered in the sun, but it wouldn’t last, and we motored the last bit to Annapolis. But just as we were docking, the breeze pawed at us again from the Southeast, and piped up through the afternoon. It’s still unseasonably breezy as I write this, but our obligations have us at the dock. This time of year, wind is a gift on the Chesapeake – we took all we could earlier this week.

a Captain for
Pride of Baltimore, Inc.