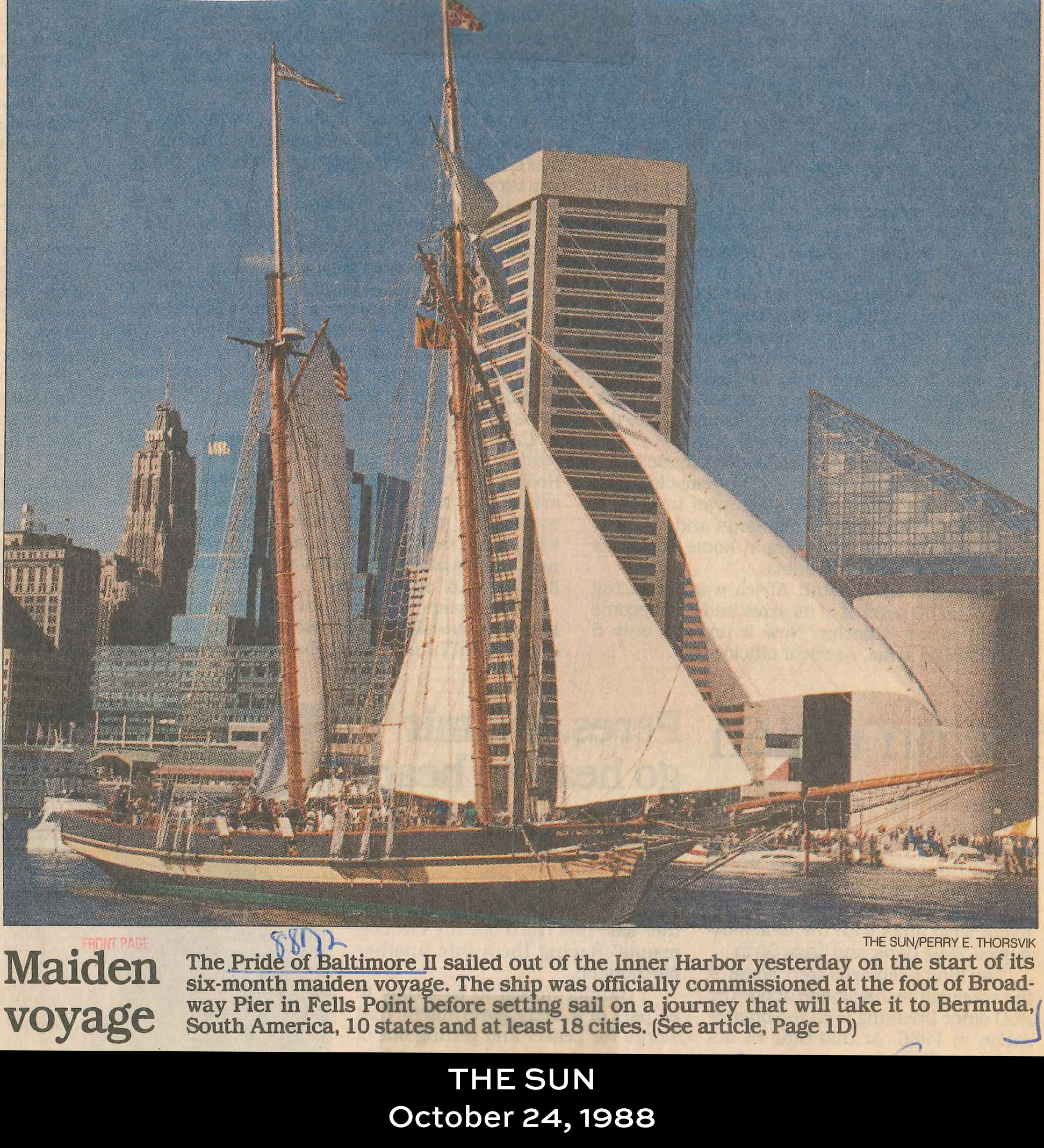 Tall Ships to Reenact the Bombardment of Fort McHenry on Sunday, September 14th,
the 200th Anniversary of our National Anthem

BALTIMORE, MD (September 12, 2014) — On Sunday, September 14 between 7:30 AM and 10:30 AM Pride of Baltimore II will lead a squadron of 10 traditional sailing vessels through the waters where, 200 years ago to the day, Francis Scott Key witnessed both the intense bombardment and the triumphant raising of the 42 x 30 foot Star-Spangled Banner over the Fort. Participating vessels in the real-time reenactment sail include the Adventurer, Celebration, Elf, Farewell, Kalmar Nyckle, Lady Maryland, Lynx, Pride of Baltimore II, Sigsbee and Sultana.

Pride of Baltimore II will portray President, the vessel Francis Scott Key sailed aboard to negotiate for the release of Dr. William Beanes from British custody. A Francis Scott Key impersonator will be aboard Pride, and will be standing on the rail to proclaim Victory as the ships process between the Fort and the vessel. At the start of the sail the Fort will be flying a 25 x 17’ “Storm Flag,” as it did prior to 9:00 AM on September 14th, 1813. At 9:00 AM, the highlight of the event will be the changing of the smaller “Storm Flag” for the larger 42 x 30’ “Garrison Flag.”

It was the ingenuity of the Fells Point shipyards and the success of Baltimore privateers, like the Pride of Baltimore II, that inspired the Royal Navy’s attack on Baltimore in 1814. When Francis Scott Key saw the American flag still flying after the all-night bombardment of Fort McHenry, he was inspired to pen the “Star-Spangled Banner.”

Pride captains have expertise in the maritime War of 1812 and are available for live interviews. Some of the participating vessels may still have space aboard for media. Contact Kate Cwiek: 240-643-0316 if interested in coming aboard. Pride will depart from the Baltimore Marine Center Boatel & Yard (1800 S. Clinton Street, Baltimore, MD 21224) at 7:30 AM.

About the Pride of Baltimore

The Pride of Baltimore’s mission is to promote historical maritime education, foster economic development and tourism, and represent the people of Maryland in every port she visits. Pride of Baltimore II is a reconstruction of an early 19th century Baltimore Clipper. These sleek, fast, and maneuverable vessels became famous as privateers during the War of 1812. Their success in capturing British merchant ships inspired the Royal Navy’s attack on Baltimore in 1814. When Francis Scott Key saw the American flag still flying after the all-night bombardment of Fort McHenry, he was inspired to pen the “Star-Spangled Banner.” Since her commissioning in October of 1988, Pride has traveled over 250,000 nautical miles, visited 40 countries, and docked in over 200 ports of call. For more information on Pride’s sailing schedule, education initiatives, or membership program, please visit www.pride2.org.

380 years ago on March 25th the first official colonists landed in what was then designated as Maryland.

This year Pride of Baltimore marked this day for the first time by sailing to Annapolis to partner up with the Maryland Historical Society and Fort McHenry in commemorating both the day and the showing of the first full scale true replica of the Star-Spangled Banner.

Pride was the carrier of the Replica Flag from Fort McHenry to Annapolis. In Annapolis four from Pride‘s crew, led by Captain Jamie Trost, carried the Banner in a procession of 1812 War period costumed militia and soldiers from Fort McHenry along with Executive Director Rick Scott & VIPs of Pride, Inc. as well VIPs of the Maryland Historical Society up to Maryland’s Capital Building. There the flag was stretched out by all assembled for viewing. In addition Governor O’Malley made awards and remarks. Awards were grants to winning grant applicants for what they will do during this final commemorative year of the 200th anniversary of the 1812 War. Pride, Inc. was awarded a grant of $125,000 to assist with her visiting around Maryland this year. Remarks were about the Governor’s pride to see the flag flying from Pride and see it shown to all at the State Capital.

All this with uncharacteristic for the time of the year snow falling and temperatures plummeting.

The day ended with a reception aboard Pride for Delegates of the Maryland Legislature. The cold drove all below – at first in take turn cycles – but then all were below with food and drink and great comradeship.

Media coverage was significant for both the day of transit as well Maryland Day.

Pride of Baltimore is the living symbol of Baltimore built schooners used as privateers in the 1812 War that caused the British to came to bombard Fort McHenry in their effort to destroy the shipyards. The successful defense by Fort McHenry and the militia guarding the land access to the shipyards of Fell’s Point in Baltimore are the reason the large 15-star-15-stripe national flag was observed flying over the Fort by Francis Scott Key as the British disengaged from their failed effort to destroy the Pride like vessels of that war. Seeing the flag wave that morning after the all night battle moved Mr. Key to write the poetry that is now our National Anthem. Pride sailing the Replica Flag to Annapolis for Maryland Day with partners from Fort McHenry and the Maryland Historical Society is a great way to mark Maryland Day and the commencement of the final year of commemoration of the war that brought identity for being American and introduced to the world, in a dramatic way, the young United States of America!

Jan C. Miles
A Captain for Pride of Baltimore, Inc.