Pride of Baltimore was built in 1977 in an open-air shipyard in Baltimore’s Inner Harbor. This Pride was the first Baltimore Clipper to be built in 150 years. She sailed more than 150,000 nautical miles in nine years before she was struck by a freak squall and tragically sunk off the coast of Puerto Rico in 1986.

In 1975, after many years of slow decay and decline, Baltimore was struggling to reinvent itself — to become once again the kind of vibrant center for business, commerce, and comfortable living that she had been in previous decades — indeed, in previous centuries. The old piers around the Inner Harbor had been cleared and a promenade built around the water’s edge. Citizens were beginning to discover that the harbor could become a magnet for people and recreation, as it had once been a magnet for shipping and trade. But something was still missing — a symbol, a trademark, an icon to link Baltimore to its harbor. City officials cast about for possibilities and an idea eventually emerged that captured the theme. Former Mayor William Donald Schaefer credits then Housing Commissioner Bob Embry with the idea, “Let’s build a ship in the Inner Harbor to draw folks downtown.” With that seminal thought, a great sailing adventure and tradition was launched that would soon catapult Baltimore back into the imagination of the nation and the world as the home of adventurous seamen and romantic ships. A name was soon selected, a choice so natural as to be almost automatic: Pride of Baltimore. The name captured the spirit of the phoenix-like town. It also tapped into her maritime heritage since “Pride of Baltimore” was the nickname of Chasseur, the largest and boldest of the legendary Baltimore-built topsail schooners that helped win the War of 1812, a conflict that first launched the city as a commercial and maritime center.

In the spring of 1976, America’s Bicentennial, an unassuming, open-air “clipper shipyard” was erected along the west shore of the Inner Harbor, just north of the newly completed Maryland Science Center. In May 1976, the keel for the vessel was carved out of a thousand-year-old piece of Central American hardwood, a species called Cortez from Belize. The adventure of recreating the first Baltimore Clipper to be built in 150 years began. That adventure came to fruition on May 1, 1977, when she was commissioned in the Inner Harbor by Mayor William Donald Schaefer amid the tooting of horns, the ringing of bells, the spray of the fire boats, and a cannon salute from the USS Constellation. The adventure of embodying the pride and spirit of the citizens of Baltimore and Maryland and representing that pride and spirit to the people and nations of the world had just begun.

The classified advertisement, placed by the city in the Baltimore Sun on September 24, 1975, seeking proposals to design and construct the first Baltimore Clipper to be built in 150 years, stated that the ship was to be “an authentic example of an historic Baltimore Clipper. The ship is to be between 85′ and 90′ on deck, fully operable, capable of being sailed, and equipped with replica cannon. Construction materials, methods, tools, and procedures are to be typical of the period.” In a word, the ship was to be a replica, built by hand with traditional materials and methods as far as practicable. 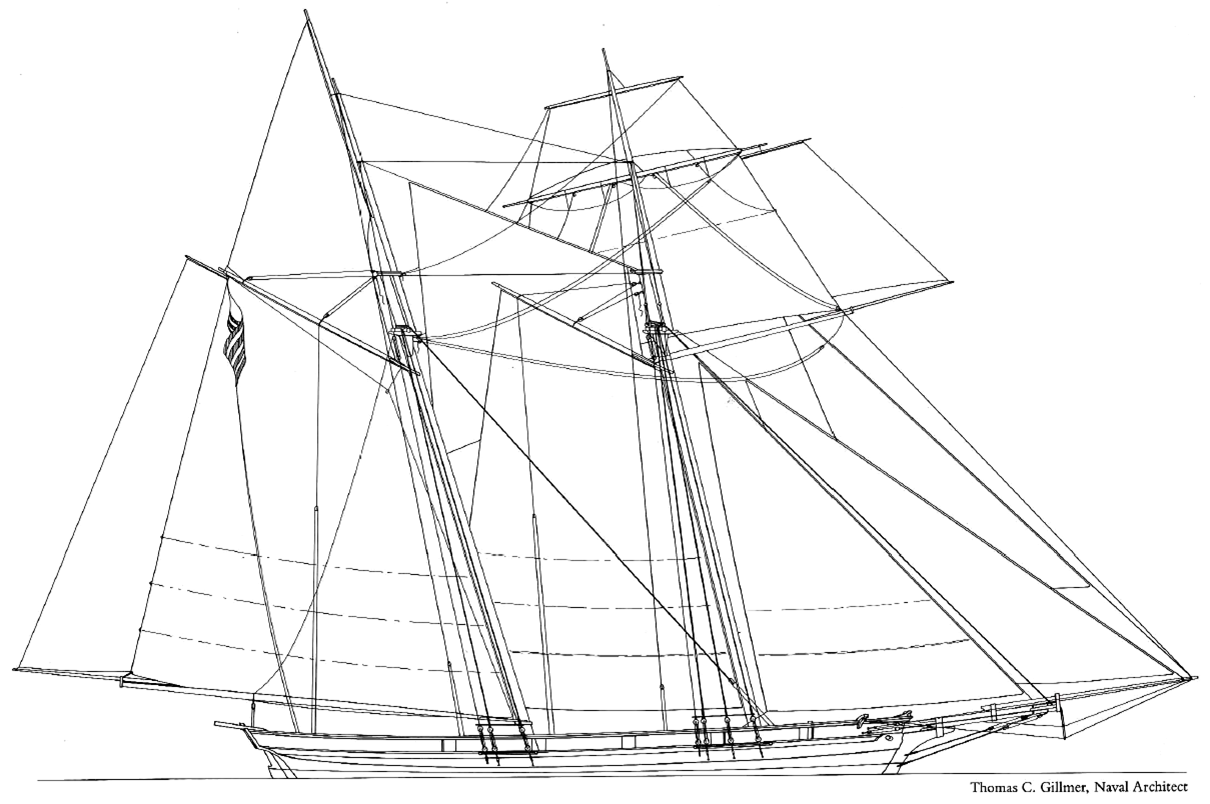 The design/construction contract was awarded to the International Historical Watercraft Society, a corporate designation of master shipwright Melbourne Smith of Annapolis. Smith had extensive experience with traditional ship repair and construction and was an ideal candidate for the task. Design of the vessel was the responsibility of noted naval architect, Thomas Gillmer, a long-time professor of naval architecture and engineering at the U.S. Naval Academy in Annapolis. The vessel was built during 1976-77 in the open-air clipper shipyard on the west shore of the Inner Harbor adjacent to the Maryland Science Center. Work proceeded seven days a week and was followed closely by thousands of Baltimoreans and visitors who watched with fascination as the ship emerged from her keel in the makeshift yard. Most of the work was done by hand using traditional methods and tools such as the adz, the caulker’s hammer, and a ship’s saw. Some of the experienced shipwrights were from Central America, associates of Melbourne Smith in a Belize shipyard where they had built and repaired boats for the Caribbean trade. Others were experienced sailors and hands from Maryland who wanted to share in this once-in-a-lifetime opportunity of building an “old style” ship in the traditional way. A master blacksmith, or rather a shipsmith, set up shop on site and forged thousands of special fittings for the vessel. By the time of launch, just ten months after the keel was laid, fifteen devoted craftspeople made up the building crew.

Pride of Baltimore was launched on February 27, 1977, by “Big Red,” a huge floating crane from the Bethlehem Shipyard, that lifted the bare hull like a toy and gently placed her in the water. The traditional bottle of champagne was cracked against her hull by then Congresswoman (now,  former Senator) Barbara Mikulski. But much work remained to be done. Forty tons of fixed ballast were packed along the keel below deck. Ballast consisted of specially molded iron pigs and cubes, as well as ten tons of traditional Belgian paving 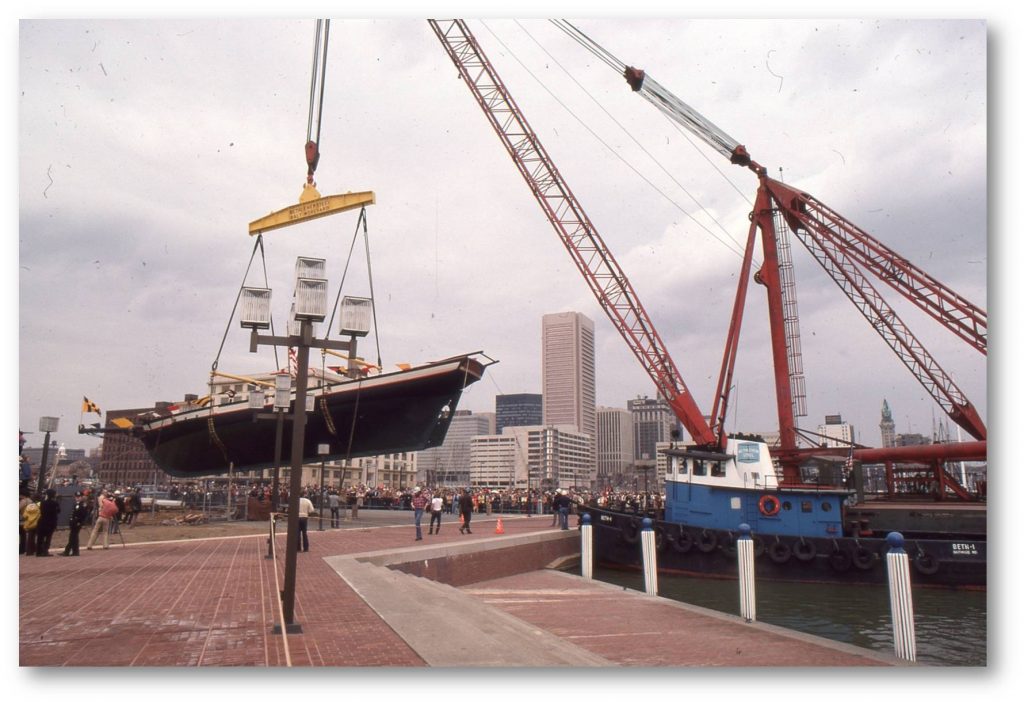 stones that had been part of Baltimore streets — and had probably arrived from Europe as ballast in 19th-century sailing vessels! The two masts and spars of Douglas fir from Oregon were shaped and stepped, and the rigging put in place. A major compromise with authenticity occurred late in the ship’s construction process as a result of the incredible excitement stirred by the arrival and visit of six “tall ships” from around the world to the Inner Harbor during the city’s 1976 July 4th Bicentennial Celebration. Sensing that Pride of Baltimore could awaken the same kind of excitement in other ports, the Baltimore City Council authorized an additional $50,000 for a diesel engine for Pride of Baltimore to enable her to travel to distant places and maneuver in crowded ports. Hence, an 85-horsepower Caterpillar propulsion system was installed. On May 1, 1977, Pride of Baltimore was commissioned by Mayor Schaefer in the name of the citizens of Baltimore and Maryland, most of whom, it seemed, were dockside participating in the ceremony. Her topside was painted black with green anti-fouling paint below the waterline. Her unmistakable signature was a result of her steeply raked masts (17 degrees), the broad white stripe along the exterior gunwale, and her flowing white banner atop the mainmast. With her gaff rigged fore and mainsails set and her square foretopsail raised, Pride of Baltimore was a beautiful and unforgettable reminder of Baltimore’s proud maritime heritage 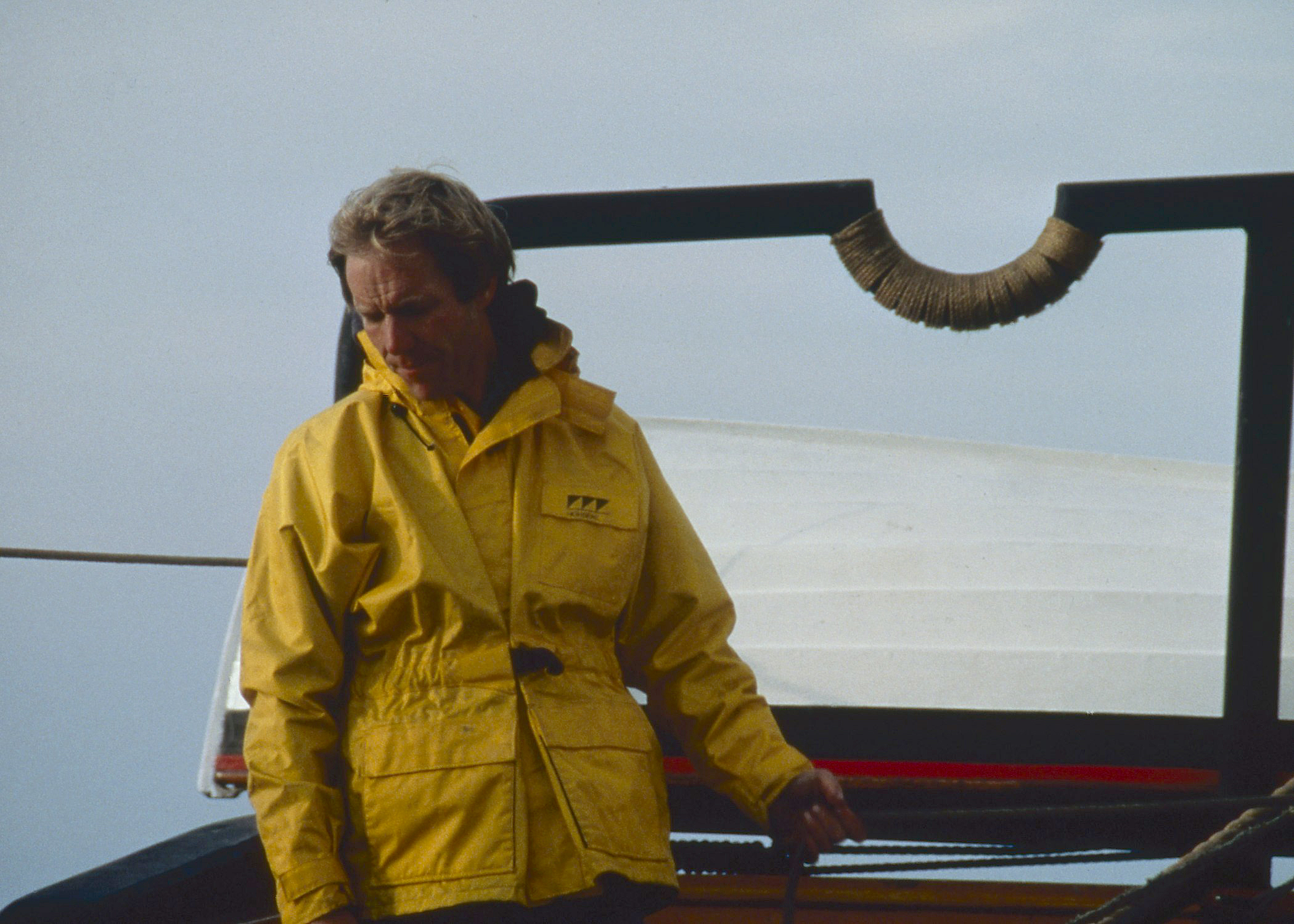 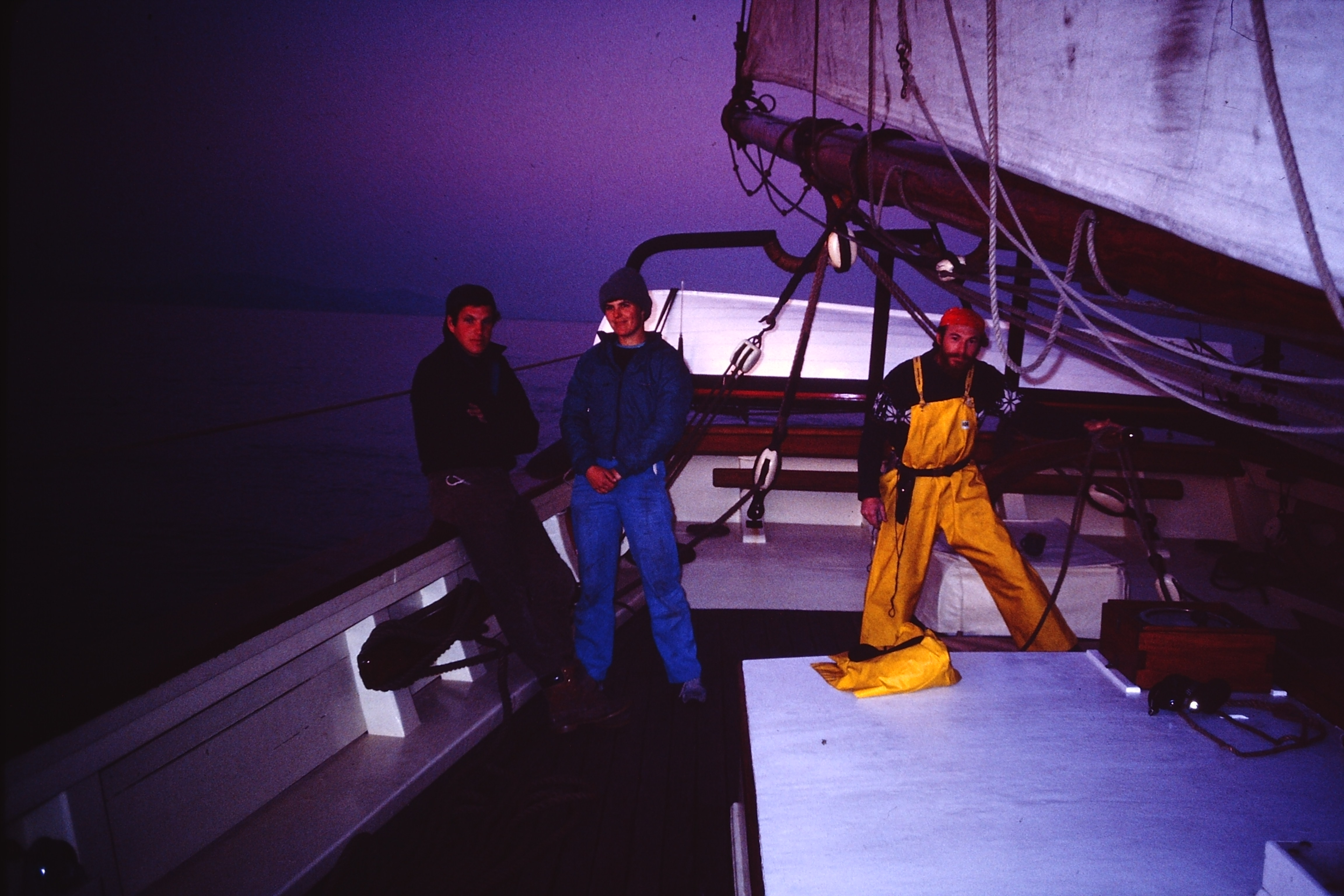 The tragedy brought an abrupt end to the adventures of a noble sailing vessel — but not an end to her mission. As the minister at a memorial service for the drowned crew members reminded his audience, “Those who go down to the sea in ships feel particularly close not only to nature, but to God.” 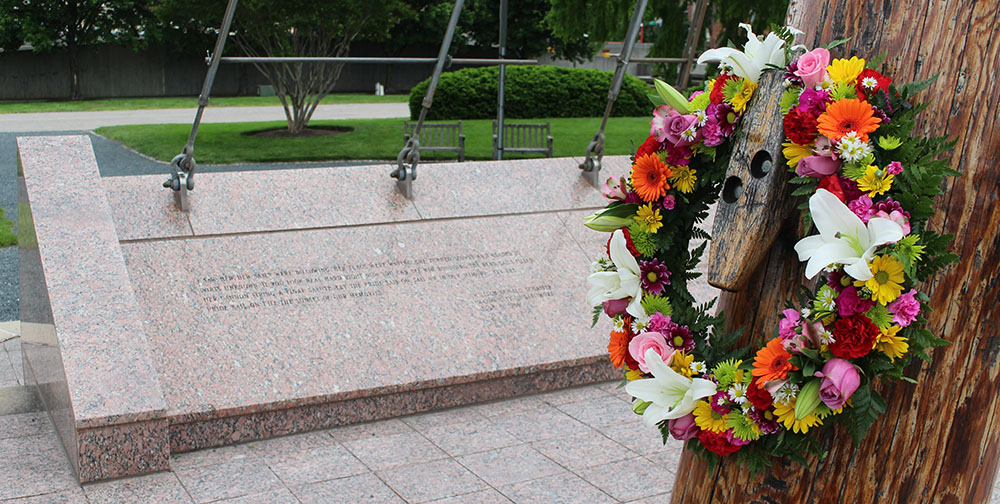