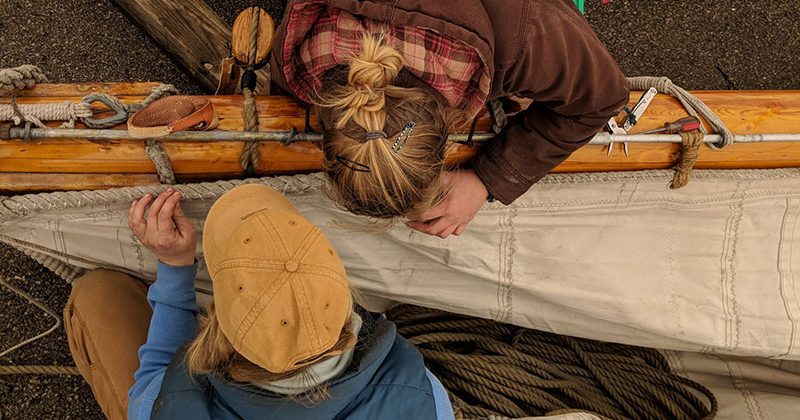 Both topmasts were fidded (proper spelling coming from the fact that topmasts are held up by a fid) earlier in the month.

Now that the top-hamper is up and attached, it is on to the more fiddley bits of up-rig.

But before those efforts, time for an all-hands day off Sunday. First time off since everyone joined the ship on Saturday, January 26, three weeks ago.

Seems like a long while to rig up? Yeah, seems so. There has been no idle time these last three weeks. Even some “midnight oil” burning. (Always plenty of that around. Trick is not to indulge overly much. There be consequences of lots of that consumed.)

The boat’s yards and spars were totally undressed for refinishing. Redressing them is a time consuming and very detailed enterprise. Lots of lashings to position properly the bits that go together. Pride is modeled after the rigs of the early 19th century. No wire, no metal screw-threaded-pin shackles, no metal screw-threaded bolts back in those days; only blacksmiths worked metal. Maybe some casting. So a lot of lashing to secure things in place. These days we have a mixture of modern attachments along with the ole’ style of lashing. Thus it is, there is still a lot of time required for prepping undressed spars ahead of mounting them into position.

Along with uprig, there is the re-commissioning process of shipboard systems. Two main engines, one generator, and two main engine driven water pumps for firefighting and bilge pumping or deck washing. Overhaul of marine toilets. Completion of install of new batteries for the 24- and 12-volt DC current systems aboard that power much of the ship’s lighting, navigation, and communications gear. And make new crew bunk curtains for the fo’c’sle to go with the repainting that occurred earlier.

Going forward, before heading down to Portsmouth, Virginia, for dry dock in early March, departure now only two weeks away, is the getting into the fiddley bits of uprig, as well as cataloging and checking safety gear. Meaning sails to be bent on while the finer points of rig tension adjustments are attended to. Mixed with safety gear working exercises and training of the crew.